We get a lot of calls and emails asking when and where we will be doing public performances here in Naples or Fort Myers. The truth is although I have been a magician here in Southwest Florida, the vast majority of our comedy, magic, and illusion shows are for private events, corporate events, and cruise ship locations. When we do take over a theater for a week it’s usually not here in Naples or Fort Myers, but anywhere from Nashville to Orlando to Los Angeles. Sadly, our performance schedule hasn’t allowed us to do many public shows close to home.
Well, a year ago we took a chance on changing that. There is a charity called 4 The Kids Foundation that has hired us for several private events for their patients and donors that we have come to love working with. The foundation is
GolisanoHospital-Naples-Magician.jpg

truly a fantastic organization built on working hand in hand with the Golisano Children’s Hospital here in Fort Myers in fighting childhood cancer. We approached them last year on the idea of waiving our fee and doing one show open to the public at the Broadway Palm Dinner Theater in Fort Myers with all the proceeds going to their fine organization. The event was a wonderful success in the amount of money and awareness it raised.

This year, we wanted to make it bigger…

So, I pulled a Who Wants To Be a Millionaire and phoned a friend, well several. I worked the phones and called several other award-winning magicians I’ve worked with at conventions and events in the past and pitched an idea… They were all in. After a December of close to 75 shows in the month, it’s great to be able to take a breath and give back to children and families in Naples, Fort Myers, and Southwest Florida. This year I am proud to be able to announce the Champions Of Magic Show here at the Broadway Palm Dinner Theater in Fort Myers on Monday, January 25th.

Including myself, there will be 4 Award-Winning Acts taking the stage with each one of us waiving our fee so 100 percent of the proceeds can go to the charity. The show is for adults and families as well with tickets being $15 for children and $20 for adults. You can purchase tickets by calling 239-343-6950, and I would love to see everyone there! We have also decided to hold off and debut several of our brand new routines for 2016 at this event! The doors open at 6pm!

Seriously, bringing everyone together like this will make this show one of a kind. It’ll be a two hour show filled with comedy, illusion, mentalism, and the best magic of all is that it is all to fight childhood cancer and benefit one of Southwest Florida’s brightest lights, The Golisano Children’s Hospital. 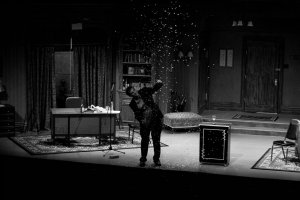